Do you need assistance with spider control in the Albury-Wodonga area? Whether you have arachnophobia or just have too many spiders to handle, we’re here to help.

Our expert spider exterminators are highly trained, knowledgeable, and experienced in tackling these eight-legged problem pests. We can assess the danger of the creatures in your home and garden and provide effective spider control and prevention methods.

When do you need spider control?

We’re lucky to live in a beautiful country like Australia, but unfortunately, it comes with some risks. Our dangerous spiders are so well-known that even people in other countries know to be wary!

While most spiders are virtually harmless, some species can be dangerous and are of great concern if spotted around the home or garden.

Some of the venomous species present in Australia include:

Unfortunately, many species are also difficult to distinguish from others, so if you think you think you’ve spotted a venomous one, it’s best to get a professional out to assess the situation. 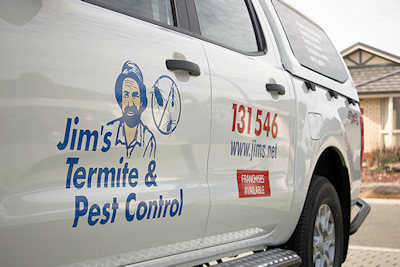 What are the risks?

The bites of venomous spiders can cause immense pain and even death. Luckily in Australia, fatalities are rare because we understand the danger, but if you believe you have been bitten by one you must seek medical attention immediately.

Non-venomous spiders tend to be more of a nuisance than a danger, but can still warrant the need for spider control. You may be irritated by unsightly and sticky webs collecting dust, but spider eggs present more of an issue. If you notice these around, you’re about to be inundated with a flood of tiny arachnids and it’s best to call an exterminator fast.

How do we treat spiders?

Jim’s technicians have been trained to inspect, assess and treat spider problems in the house and garden.

We always begin with a thorough inspection so we can find any hidden breeding or hiding places.

Once we have located the problem areas, we apply a professional-grade surface spray that’s been licensed and formulated for spider control.

Safe for people and pets

Jim’s treatment methods are completely safe once they are thoroughly dry, so you can confidently use them in areas that will later be accessed by children and pets.

Protecting yourself from spiders

At your pest control appointment, we will discuss prevention methods and how to stay safe from venomous spiders.

These safety measures include:

For expert advice when it comes to spiders, contact us today.